Here is a link to the full article: Correlations and Active Opportunities.

One might ask why the correlation formula subtracts out the means. To be clear, this is not a flaw in the formula itself; it is more an issue of how the formula is applied. When data is sampled from a larger population and analyzed (think of the heights of human beings), the population mean is the best guess for any individual observation (when randomly chosen). Moreover, the average of any sizeable sample of data points should be close to the population mean. So it is sensible to assume the mean of the sample is relevant.

However, the returns of financial assets are not independent random samplings from an existing population of returns. Stocks follow fundamentals over the long term. All else equal, returns in one period impact the distribution (e.g., mean) of returns going forward. In other words, the returns are not independent. For example, consider an asset that was expected to return +10% over the next year. If it jumped 20% in the first day, then the expected return would become closer to -10%[1].

My point with the above example is that subtracting a mean return from observed returns does not make perfect sense with asset returns since there is time-series dependence. So the mean would change through time. In practice, this may or may not have significant impact on the correlation calculation and this might just be nitpicking. However, it does not alter the primary point of the article; correlations are more or less useless when one is ultimately concerned with overall asset performance.

Looking at and discussing formulas might give some folks a headache. So I built a spreadsheet to illustrate that assets can be 100% correlated but have significantly different returns. In particular, I used randomly generated numbers to simulate two stock trajectories. The simulation was designed so that the stocks were perfectly (100%) correlated. However, I created inputs for the expected returns and volatility for the stocks.

The spreadsheet contains four sections (three of which are depicted in Figure 2 below). The first section is for the inputs. You can enter expected returns for two stocks labeled A and B. You can also enter a figure for the expected volatility. If you hit F9, then the second section containing a table of simulated data (not shown here) will update.

In the third section for output you will see two figures. The first is the correlation of the two stocks. This will always be 100% by design. The second output figure will be the difference in the returns. This return spread will show the assets perform according to the expected returns (albeit with some random noise).

The fourth and last section is chart of the stock trajectories. As you will see, the stocks will move in the same direction on a daily basis, but eventually follow the paths as dictated by their expected returns. This illustrates my overall point; stocks can be 100% correlations but generate completely different returns. 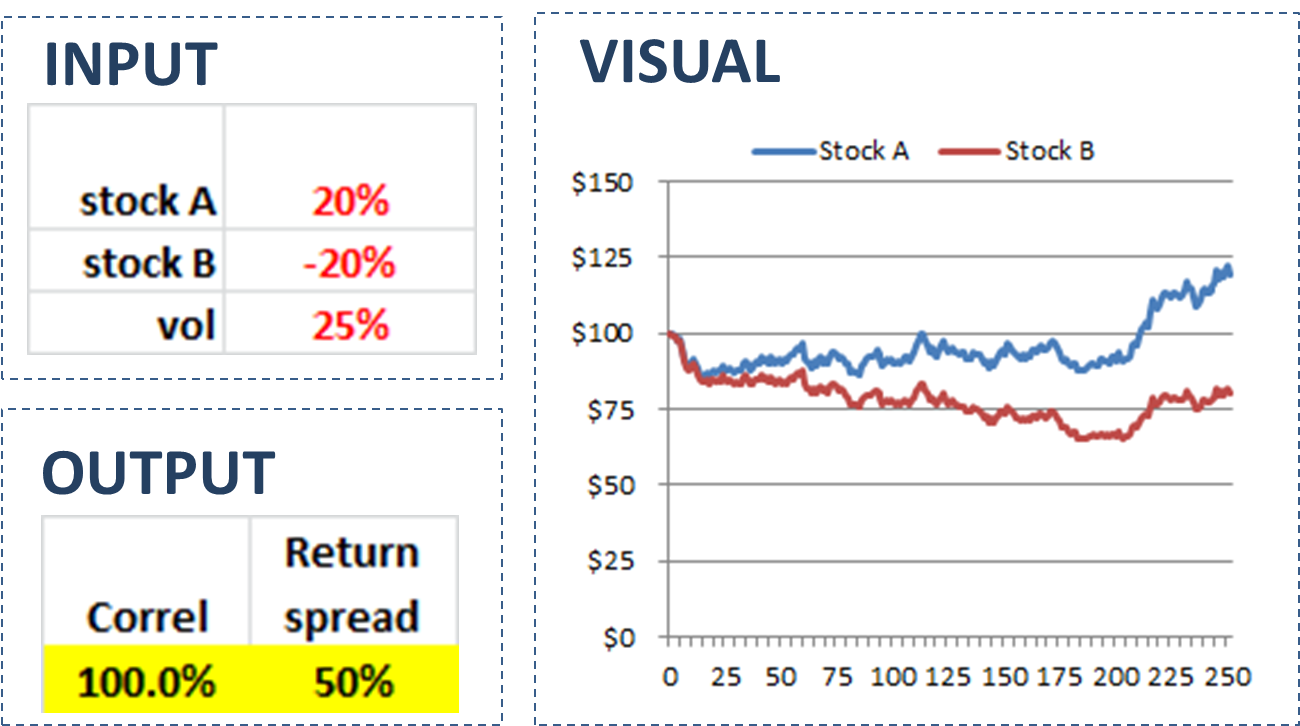 I hope the above discussion and my spreadsheet have shown the correlation formula can be altogether useless when measuring the opportunity for stock-picking opportunities. However, I will offer one last perspective that will hopefully put a nail in the coffin of the misguided claims around this notion.

Let us consider the hypothetical scenario where stocks moved 100% lockstep. That is, every stock is 100% correlated and even has the same volatility. Interestingly, this would actually create opportunities for active managers because fundamental performance of stocks varies. In particular, lockstep price movements would pull some prices away from their fundamentals and thus create mispricing opportunities for active managers to exploit.

Interestingly, I would argue there are currently many rules-based strategies being employed that are impacting stock price trends including correlations. I discuss these strategies and their potential impact going forward in my Zombie Market Primer article.